The Status Ko’s specialists are not amateurs, but professionals who know how to localize your video game so that it will please millions of gamers around the world.

Why is the localization of video games necessary?

Video games gradually fill our life. This form of leisure has become very popular during the development of information technology. In addition, computer games are a fairly extensive market. In 2016, the total revenue from the video game industry was 91 billion US Dollars. Gaming mobile applications were the favorites —40.6 billion US Dollars, and games for personal computers —35.8 billion US Dollars.

Ukrainian developers are also gradually conquering this niche. Many European gamers are familiar with such companies as GSC Game World (developers of the game series S.T.A.L.K.E.R. and Cossacks), PERSHA STUDIA (cooperating with Wargaming), and 4A Games (gave us a series of games from the cycle Metro). There are also offices of such legends of the gaming industry as Ubisoft, Crytek and Frogwares Games, and the companies developing games and applications for iPhones and Android mobile devices today are simply countless in Ukraine.

As you can see, the video game market is not an innovation for Ukrainian entrepreneurs and consumers. But, joining this sphere, you should understand that in order to sell your product in the western (if you are a Ukrainian developer) or in the Ukrainian market (if you are a representative of a foreign corporation), it needs to be localized in a quality manner. And this is not always a simple process.

Localization is not a trivial translation

Although initially it may seem so. In fact, high-quality localization implies full adaptation of the product to a particular gaming market. However, today you can find many kinds of localization. Some of them are presented below:

This is not a localization, but a simple translation of the text on the box with the physical medium of the game (disk), or translation of the video game description on the website of the online store. The game itself is not translated or adapted, therefore only native speakers can enjoy it.

More advanced version of the previous localization. That is, in addition to the text on the box, all the buttons that appear when the product is started are also translated: New Game, Download Game, Options, Exit, etc. But the plot itself is not subjected to translation, so only native speakers will be able to enjoy such a product.

ТIn this case, both the interface and subtitles to the main plot of the game are translated. An excellent example of such localization is a series of games Grand Theft Auto or Call of Duty, where, in addition to the original sound, there are also translated subtitles, tasks and goals provided.

It involves professional actors who completely dub the main characters of the game.

In this version, the product is completely adapted to a particular market. Any detail and any text are subjected to translation. This is the most complicated and laborious kind of localization.

Now we know what localization is, but who are game localizers, and how many people are directly involved in the process of localization? The answer is a whole team. Translators, editors, programmers, web designers, actors, audio engineers and testers — all these people are an integral part of localization. Not everything is as simple as it seems at first sight.

How long does it take to localize a video game?

It depends on the product itself and on the localization team. For example, the adaptation of the famous RPG The Elder Scrolls V: Skyrim took 4 months. During this time, the localizers had to process about 6 megabytes of text and to dub 60 000 lines. The whole team consisted of 98 people: 20 people were engaged in translation, and 78 were dubbing actors.

The larger is the project, the more work it will require from the localization company. But indie games or gaming applications for iPhones and Android devices take much less time, because most often only in-game texts and interface of these games need to be translated.

What are the problems faced by video game localizers? 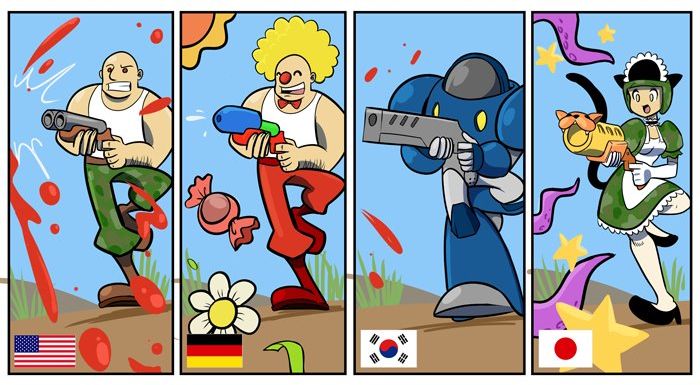 Large amount of work often portends serious difficulties, and sometimes mistakes cannot be avoided. Not all of them are serious, but there are also localization variants that simply level a high-quality game. What are the most common problems faced by localizers?

One person cannot accurately translate massive volumes of text in a short period of time — this is physically impossible. Therefore, such texts are “broken down” between 2-3 translators and editors. And then a problem arises, because everyone sees only his/her part of the text, and the overall result is shown at the end. As a consequence, some fragments differ in stylistics from each other in the localized version. For example, in the game Uncharted 4: A Thief’s End, there is a group of mercenaries, called Shoreline (coastline). In the game itself, it was initially translated as a Battle Patrol, although, according to the rules, the names are not translated. By the end of the game, they remembered this, and gave the group its original name — Shoreline.

The semantic accuracy and correctness of translation does not always depend only on localizers. Publishers and developers play a very important role in this process. They should provide translators and actors with all the necessary materials, sounds and videos so that they can be guided by the character and his/her emotions in what exactly he/she wanted to say with this phrase. If there are no such materials, translators and actors are guided only by their intuition.

Have you ever noticed when watching dubbed movies how smoothly the main characters say phrases in Russian or Ukrainian? This is lip-sync (lip synchronization). High-quality lip-sync is the merit of professional actors, audio engineers and editors. Their task is to convey the whole essence of the phrase within the allotted time, while the character is talking. Some English sentences may have rather profound meaning, and to convey it, actors sometimes have to quickly place a huge phrase in a small amount of time. Because of this, in the end, there are snatches of sentences that are noticeable in any game.

These are the main problems of modern computer game localizers. Therefore, if you do not want to risk quality, contact real professionals when you release your own project in the western or Ukrainian market.

Status Ko company has professionally dealt with different types of translations for more than 20 years. The range of services includes translations of audio and video materials, websites, as well as computer programs and applications. It’s time to deal with video games.

Do you want to adapt your video game to the CIS countries, the US, Europe or Asia? Contact Status Ko. The company’s specialists speak more than 60 languages and know all the subtleties of adaptation of spoken and written turns.

Advantages of cooperation with the company:

In their work, specialists often face non-trivial and complex tasks, but this does not prevent them from achieving their goals confidently, namely, to obtain a modern, conceptual and fascinating video game after adaptation. The Status Ko’s specialists are not amateurs, but professionals who know how to localize your video game so that it will please millions of gamers around the world.